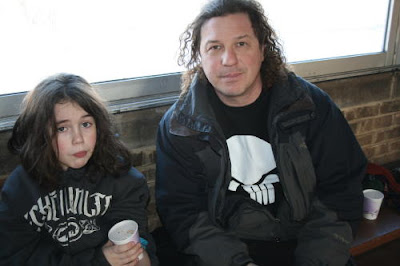 A&E, or "The Death Channel", as our friend Dave L. fondly dubbed it, is alive and well in these tough economic times. For the next several months Dug is shooting Paranormal Cops around Chicago and the burbs. It seems that people still love to see those worse off than they are, like the recently murdered and those not resting in peace. 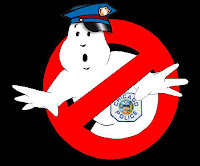 The Live Feed featured a posting including this fun graphic, and most of the articles about the show are playing off the Ghostbusters themes, ala "Who ya gonna call? How 'bout 911." They're even resuscitating the infamous line "I ain't afraid a no ghosts."

Despite all the teasing, Paranormal Cops is taking the shoot very seriously. They operate with four real police officers, two tech assistants and a medium who can communicate with the spirits and translate. Here's the official press release . Their tag line is "Extraordinary claims require extraordinary evidence."

The cast and crew are working 3 day weeks including brutally long Wednesday night shoots from roughly 4PM to 4AM with E.S.P.--(Extra Superheavy Packsofgear). I can't spoil any info about specific episode content, until that info is made public, but we'll update as more info becomes available.
Posted by Bonnie Kenaz-Mara at 9:43 AM